A print and play dungeon scrawler, inspired by Dark Fort, 12 Years, and Dungeonquest/Drakborgen.

I hope to polish this up further and do a print version to accompany the release of my forthcoming Mörk Borg adventure TRAGIC CASTLE OBSESSION! Until then, enjoy!

The Seventh Misery is at hand, yet there may be salvation for some…

As the skies darkened and the sun burned out, people whispered of the Mandates of Nechrubel: documents sealed by that great and dismal deity guaranteeing passage on the wings of the great Two-Headed Basilisk. Passage from the Dying World to the Undying Hereafter.

Five copies of the Mandate have been recovered. You have lied, betrayed, tricked, and murdered and now hold one in your grimy fist. Now you must descend into the catacombs beneath Bergen Chrypt and present your Mandate to the head of Verhu…

BASILISK! is an independent production by 1d10+5 and is not affiliated with Ockult Örtmästare Games or Stockholm Kartell. It is published under the MÖRK BORG Third Party License.

I’m playing through this right now and I’m confused on how escaping works; if part of my party escapes, then the monster follows the other half to the next room where there’s another monster, how does that work? Does combat start from the top again? I’m new to this so sorry if this sounds like a newb question!

There is  no party. You choose one character at a time to enter, explore, and likely die. Once they are dead, put a cross through the  and choose another character to enter. Perhaps they will seek a new path - or perhaps they might defeat whatever killed the last character and loot their corpse...

I was finishing up playing for the night a few minutes ago and just re-read the rules and realized I missed that, lol. It makes a lot more sense now, thank you! Loving the game!

After the Arch Cultist slipped two of my hapless scvm a poison blade, and a third was hit with neurotoxin, blinded, and then caught in a Whisperbird deathloop, wily Finnegan Celery decided to take his time, looting and stepping over the corpses of his comrades before heading down into the Tunnels of Nechrubel. After snatching a Vampyric Charme from the jaws of a Wyvern Kin, and going back above belowground, he used the power of the his new treasure to conjure a backup Mandate, and then spent a lazy afternoon kicking walls, unleashing weak monsters instead of finding secret doors. With a bomb and flail he descended into the lair, killed the cultist, and managed to earn Verhu's favour with the crumpled wad of paper in his back pocket.

What a blast this was to play! The care given this design instantly convinced me to buy the Solitary Defilement boxset in the recent reprint.

Thank you so much for the amazing map and session report. Glad you enjoyed it. Hope to publish a prequel game next year once things calm down here! :D

Is there any possibility that both Basilisk and Tunnels of Nechrubel could be released as single sheets for easy printing (as opposed to spreads)? Many thanks for all the games that you have provided us with and also for the incredible Sölitary Defilement KS. I do hope that you will work on more solo resources for MB.

It has not exits - only the way you came in.Every time you enter it, the whole room rotates clockwise. This could also mean it traps you in some circumstances!

Only the left and right edges of the dungeon act as walls. The top and bottom 'wrap' around, so you can use an arrow to move from a space in the bottom row to a space in the top one, or go from the top to the bottom.

Oh, wow, I hadn't understood that in the rules... Ok, I think I have it all pretty clear now. Just one more question and I think that I will have finished with the doubts. Is there a penalty for going through previously explored rooms?... In Dark Fort, there are roaming enemies lurking if you undo your steps but I don't think I've read anything about it in this game.

No. The game was too difficult with such penalties, and I also felt it slowed it down. The only time you might get such penalties is when searching.

Always roll for exits on a special room, unless it specifies a number of exits in the description.

Glad you are enjoying the game!

Small question, due to my non-native English comprehension. What do you mean by "Traps remain on the map until triggered." Do they disappear after someone stumbles on them or are they permanent features of the map?

Congratulations on such a good one page wholesome dungeon delve. Very good and soon enough I will start to drop session reports on my blog Browsing Games. :)

Thank you! Yes  Traps disappear on r someone stumbles into them! :)

Loving this game. LOVING IT. Came to a hair's breadth from the lair but dead end! Then I got hounded by inquisitors to death. My first character died in round 1 of combat 1 in room 1 tho so I'm gonna say I only had 4 proper characters lol.
I do wanna know if multiple pets stack damage? Like two dogs or dog and monkey etc?

Thanks so much for this! And, yes - additional pets stack damage!!

Odd question: can I get a look at some of the playtest versions of the game? I've read the design notes and would love to see the game in its early stages and see how it changed and why! I do wanna sink my teeth into this neat little gem.

Very excited for Tunnels of Nechrubel. Printing it now with a fresh stack of "page 5"s. This is easily my favorite solo game. I have burned through so many runs and have never actually won. I've brought the mandate to Verhu ONCE and it was FAKE!

Yeah, I think after about 15 plays I have only won once... but i have enjoyed every attempt immensely! I would say maybe 70% of the time I do at least make it to the Arch Cultist, though!

Cool game! Video on the dungeon dive coming this week. If I'm not mistaken though, there are no rules included for stat checks / challenges. I'm assuming it's D20 + stat mod, right?

You are right, and thanks for pointing out that oversight! I will check the rules! :O

Coming from someone that loves both Drakborgen and Mörk borg, this is f-ing genius!

Thanks, hope you enjoy playing... just had my second win put of around eight plays, and quite enjoying the choices it occasionally foists on the player. There are a few minor tweaks for the next revision, but I think the rule set is almost there...

Thinking of adding an addendum with two player rules, too... 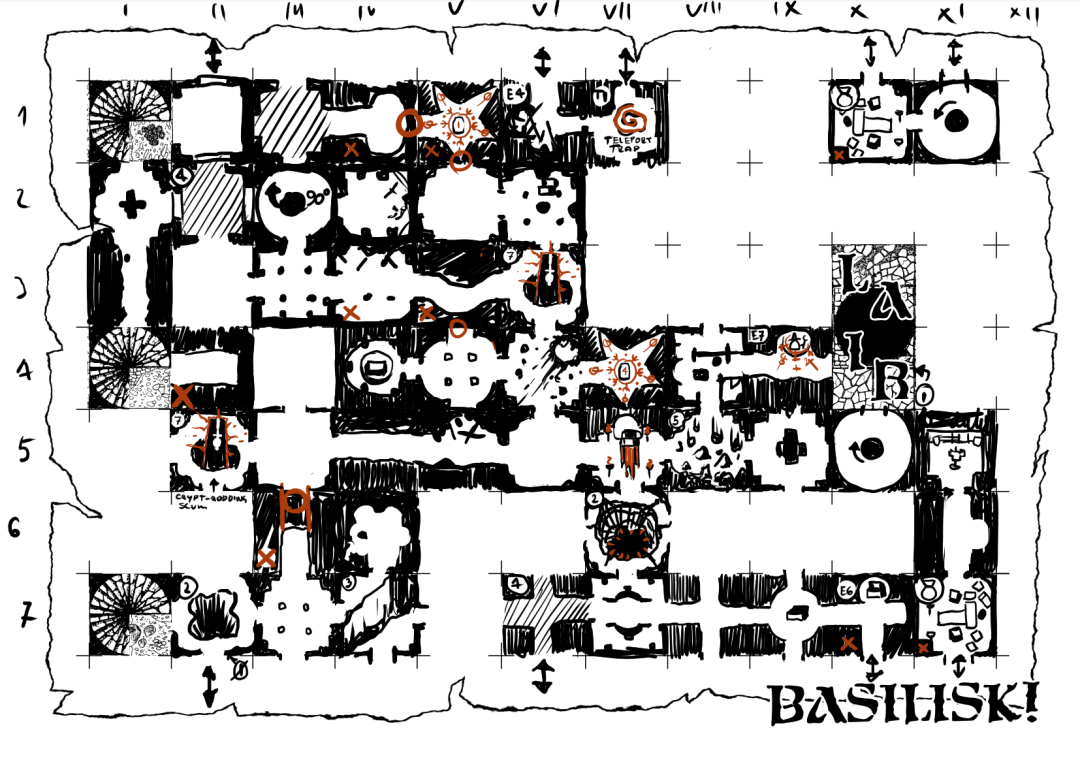 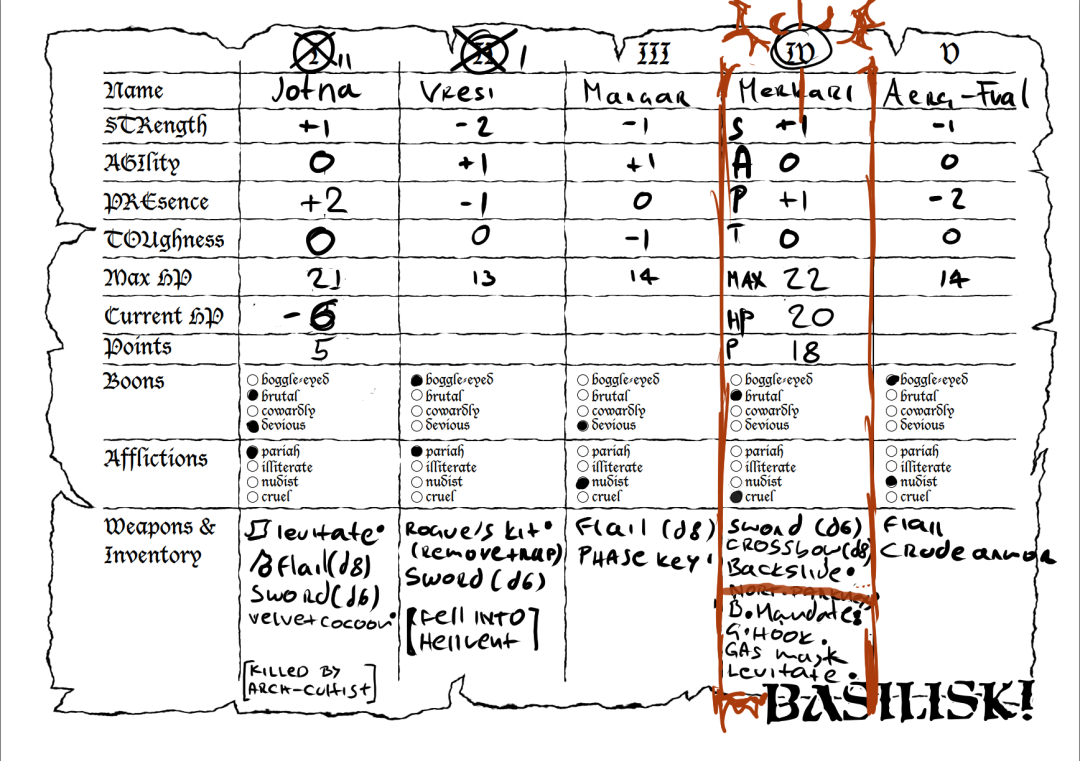 I won my first game :D
So far it's awesome!
It would be good to have an example of play here. I've done mine on PC.
I'm already considering just using the dungeon oracles from Solitary, for flavor, but as far as a mapping square crawl go, this is cool.

If you want, please consider the following suggestions:
- I may have missed rules considering backtracking, but that might be cool too. I'm worried that one might explore most of the dungeon  too quickly, and that doesn't leave much to do for the others.

Might  be cool to consider a special bonus for mapping out the entire dungeon, if possible.

So far, it's really cool, I like it, definitely something I can see myself messing around with on the go.

:O This is so awesome, I LOVE IT! Thank you - do you mind if I share this on Twitter?

Thank you for all the feedback - really helpful. I'll be putting out some revisions early next week!

Hi! I'm playing the game, and There's something I'd like co clarify :
When getting better, do I spend 10 pts on ALL of the below, or a single thing?
I'll post the results soon when all my scvm's dead :D

Only a single thing. I will edit the text for clarity on that later!

Thanks :)
I think just doing those grey and white boxes to separate them visually as individual options will do just fine. 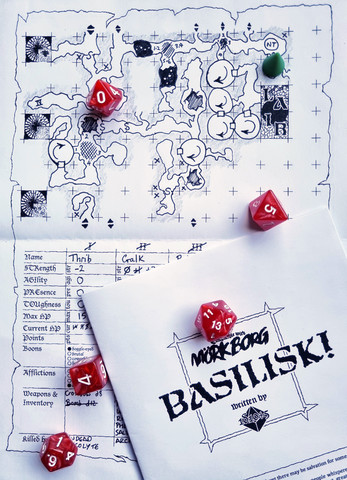 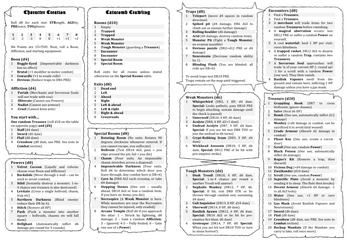 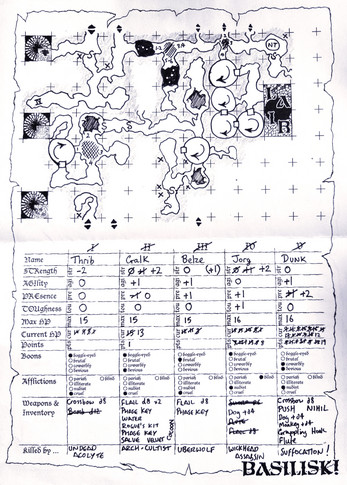